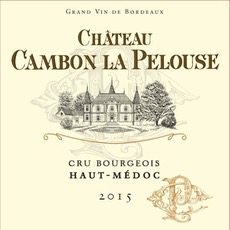 Chateau Cambon Le Pelouse dates back to the 1700′s, when it founded by the Cambon family. Like numerous Bordeaux chateau, the estate has had numerous owners over the centuries. During the 1800′s, Chateau Cambon Le Pelouse shared owners with Chateau Cantemerle. However, the true modern era begins when the property was purchased by Jean Pierre Marie, who added the small production wine, L’Aura de Cambon from vines planted in the Margaux appellation to his portfolio a decade later, in 2006. The 35 hectare Bordeaux, Haut Medoc vineyard of Chateau Cambon Le Pelouse resides in the commune of Macau, not far from Chateau Cantemerle and Chateau Giscours. The gravel based terroir is planted to 50% Merlot, 45% Cabernet Sauvignon and 5% Petit Verdot. Like all Bordeaux estates, the blend changes from year to year. In some vintages, Chateau Cambon Le Pelouse uses one of the highest portions of Merlot in the Left Bank. For example, in 2001, the wine was produced using 60% Merlot in the blend. The current vineyard plantings show a change in their makeup, as all the Cabernet Franc has now been removed. On average, the vines are 25 years of age. The vineyard is planted to a vine density of between 5,000 vines per hectare and 7,000 vines per hectare. A lot of effort goes into producing the wine of Chateau Cambon Le Pelouse. Following a five to seven day period of cold soaking at an average temperature of 6 degrees Celsius, the wine is fermented in temperature controlled, stainless steel vats. Recent renovations added enough steel tanks to allow for vinification on a parcel by parcel basis. Malolactic fermentation takes place in a combination of French oak barrels and stainless steel vats. The wine that endures malolactic fermentation in barrel is aged on its lees for six months. Cambon Le Pelouse is aged in between 40% and 50% new French oak barrels for an average of 20 months. On average, Chateau Cambon Le Pelouse produces close to 15,000 cases of wine per vintage. There is a second wine, Chateau Trois Moulins.