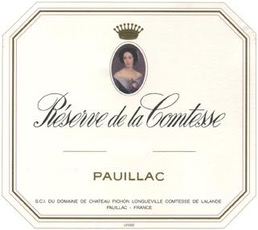 WS 90-93, RP 92-94+ Pierre de Mazure de Rauzan, a wealthy bourgeois trader from Bordeaux, bought some vineyards near the Latour fiefdom and established a wine-growing estate, L’Enclos Rauzan. A little later his daughter, Thérèse, received it as a dowry for her marriage to Jacques François de Pichon Longueville, President of the Bordeaux Parliament. And so began the history of one of the greatest Bordeaux vineyards, which stayed in the same family for over 250 years. As early as the eighteenth century, this great wine was already benefiting from a significant feminine touch. The Pichon Longueville baronesses – Thérèse de Rauzan, Germaine de Lajus and Marie Branda de Terrefort – were a strong guiding influence, managing the vineyard until the eve of the French Revolution. The young Baron Joseph de Pichon Longueville inherited the vineyard from his mother, Marie de Terrefort, when he was just 19. He died at the age of 90, having lived through three revolutions, the reign of five kings, two republics and an empire. In spite of the difficult times he doggedly sought to improve the quality of the wine. His efforts were rewarded in 1855, in the rankings carried out under Napoleon III, when the château was classed as a Second Cru. . In 2007, Madame de Lencquesaing decided to pass on her vineyard, in order to secure its future. She chose Louis Roederer to take over from her. This family business headed up by Frédéric Rouzaud already owned two other Bordeaux crus, Château de Pez and Chateau Haut Beauséjour, in addition to other high quality wines in Provence, Portugal and the United States. For three whole centuries, just two families did their work to make the château and its wines famous. Today, a third family now oversees the destiny of this cru, with the aim of building on the work accomplished so far – and raising the level of quality and prestige still further.