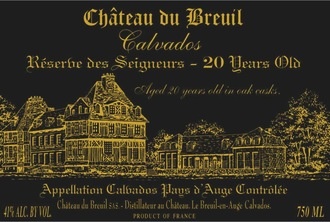 A very special blend of the most prestigious Château du Breuil Calvados., aged at least 20 years The large tannin content in this very old Calvados gives it a beautiful amber color. Savored at room temperature, "Réserve des Seigneurs" is a full-bodied Calvados with a well balanced aroma. Normandy is also a country of rich historic and architectural heritage, located in "Pays d'Auge". Nestled in the green heart of Normandy stands the Château du Breuil. This attractive slate-roofed château was built in the 16th and 17th centuries and the home of nobility. Calvados with the AOC "Pays d'Auge" requires cider apples produced in Pays d'Auge area and a double distillation. It makes a finer Calvados, due to the quality of apples produced by the local soil, and to the elimination of the roughiest parts of the alcohol during the distillations.The Château du Breuil makes AOC Pays d'Auge Calvados only. In the cellars, Calvados ages only in oak casks. The Château du Breuil company chooses its barrels carefully, because the kind, size and age play a very important part in the quality of ageing. The subtle exchanges between wood, air and alcohol give Calvados its smooth flavour and bouquet.