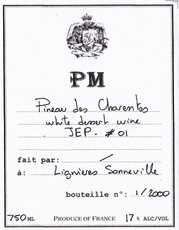 The origin of Pineau des Charentes is a happy accident when a Cognac producer inadvertently dumped a load of grape must in a vat that still had some Cognac left in it. About a year later he realized what had happened but decided that the concoction was delicious. Today's Pineau des Charentes is essentially made the same way i.e. adding freshly pressed, unfermented grape must to the previous year’s eau de vie and then aging it for a minimum of eighteen months, with at least twelve months spent in oak barrels. Scarcity is what keeps the Paul-Marie releases from being more well-known. At most two casks are released of a particular Vin de Liqueur. Selling the Pineaus is not the difficult part, it is sourcing them. Each cask is tasted multiple times to ensure quality and purchased on the spot for provenance.