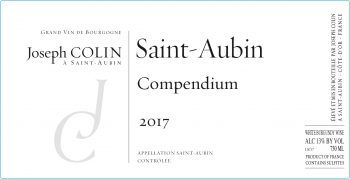 Clay-limestone soils, lots of stones. indigenous yeast, aged in barrel (25% new) 90 Points WA "Aromas of green pear, fresh peach and hazelnuts introduce the 2018 Saint-Aubin Compendium, a medium to full-bodied, satiny wine that's racy but open-knit. Charming and already expressive, this will drink well on release.” Joseph is the son of Marc Colin, and the younger brother of Pierre-Yves Colin In 1993, at the age of 19, Joseph began working full-time at Domaine Marc Colin For the next ten years Joseph worked alongside his father and older brother until Pierre-Yves left Marc Colin in 2003 to create his own Domaine – PYCM Joseph effectively started his own domaine in 2017 with approximately 6 ha of vines from the original Domaine Marc Colin