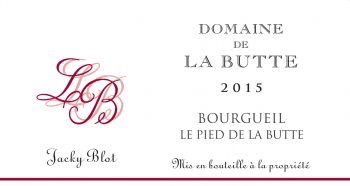 After founding Domaine de la Taille aux Loups in 1989 and bringing its wines to international acclaim, Loire master Jacky Blot acquired Domaine de la Butte in the appellation of Bourgueil in the summer of 2002. He seized upon the opportunity to make equally great reds by acquiring an ideal bloc of Cabernet Franc vines averaging 30 years of age entirely on one, south-facing slope bordered by protective forests in Bourgueil. The entire slope has a bed of limestone rock and different top-soils and microclimates. The variations give rise to the four cuvees that Blot crafts at his Bourgueil domaine. He aims to produce dramatic, intensely flavored and original red wines.