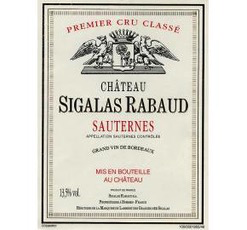 In 1863, Henri de Sigalas buys Rabaud, classified Premier cru in 1855, a property in bad condition. He brings it his ability, his availability and his name. Previously, on the "left riverside", the great terroirs have been discovered during the XVIIth century by magistrates from the Parliament of Bordeaux. The Rabaud Counsellor "created" 60 hectares in the South of the Ciron river. In 1832, the Julien Guide, which is the ancestor of the modern Feret, places the production of Rabaud at the same level as Yquem and Rayne-Vigneau. When he dies, in 1895, Henri, who was a not remarried widower, has renovated a vintage which, although being heterogeneous, "holds its rank" nearby the Bordeaux trending companies.