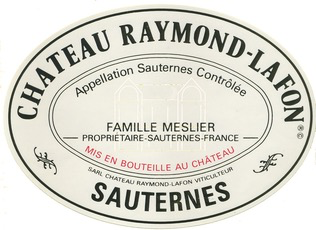 Although Château Raymond-Lafon has long been considered one of the best producers in the Sauternes appellation, it was not included in the 1855 classification, as Monsieur Raymond-Lafon founded the estate only five years earlier. Inherited by Louis Pontallier at the turn of the 20th century, the property’s reputation for quality continued to grow, but Raymond-Lafon’s greatest wines were to come under the stewardship of Francine and Pierre Meslier, who purchased the estate in 1972. An agricultural engineer, Pierre Meslier was the longtime manager of the famed Château d’Yquem, situated just above Raymond-Lafon. Following the Yquem blueprint for the highly-specialized cultivation and handling of grapes blessed with the noble rot (botrytis-cinerea), he set out to match Yquem in quality.