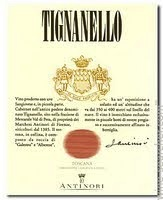 96 Points Suckling 95 Points Antonio Galloni “The 2012 Tignanello is deep, rich and voluptuous, yet also retains a distinct element of classicism in its focused, mid-weight structure. Dark red cherry, pomegranate, kirsch, spice, tobacco and menthol open up in the glass, but only reluctantly. Firm veins of tannin and pulsating acidity give the wine its sense of energy and verticality. The mid-weight structure should allow the wine to open up in another few years. The 2012 isn't as powerful as the 2010 or exotic as the 2011, but rather is most similar to how the 2005 was in its youth. The 2012 is a Tignanello built on pure finesse and grace. I would not open a bottle before its tenth birthday, if at all possible.”